Religion a source of humour on stage

Pondering on our latest production Shenanigan’s Wake, about a community of unsophisticated Irish folk celebrating the life of their friend Seamus Shenanigan, I wondered if anyone had taken offence to the references to religion. I hope not because none was intended. It was all lighthearted fun. The characters in the play are all Roman Catholic so when Molly reveals her colourful past, a shocked Hedley asks if she was . . . “a harlot, you know that word beginning with P?” “Protestant!” Digby helpfully suggests. There’s definitely a relationship between religion and theatre. Just think of the first enactments most of us in the Western world experience as children as the story of Mary, Joseph and baby Jesus is told. I remember blinking back tears (not sure if it was sentimentality or mirth) as I watched my then 6-year-old daughter dressed as an angel wiggling the loose tooth of her neighbouring angel”. They might have been part of an age-old tableau but they were still little children. All the parables lend themselves well to dramatic interpretations, the stories told on stage and screen. There’s no shortage of drama in the Christian Bible, just as all the other great religions of the world express their beliefs in their rituals and theatre. There’s no need to feel that because we can laugh at ourselves and some of the attitudes people have that we are any kind of insidious threat. It’s just a little gentle teasing, a wee bit of fun. 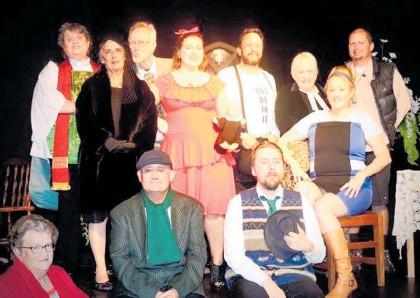