Community stumps up for tree carving 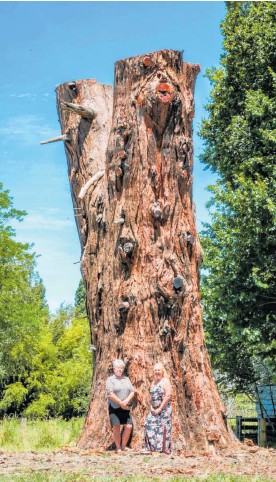 Carved out of a single large redwood stump, in the heart of a Hawke’s Bay valley, two giant Anzacs will stand as one. It’s a potentially stunning and years-in-the-making project that could bring the small river community of Rissington into the spotlight as a place to visit, if enough people are prepared to donate to make it happen. Wind the clock back a few years and the Rissington Community Group was devastatedwhen the Hastings District Council told them their 40 metre-tall intersection-splitting redwood tree had to go. The council had discovered the roughly 120-year-old tree, which has for generations been one of the focal points for travellers between Puketitiri and Napier, had dieback. Because it was sitting in its prime spot at the intersection of Puketitiri Rd and Soldiers Settlement Rd, the risk of it falling was not one worth taking, council experts decided. But a group of locals vowed the tree wouldn’t be consigned to history, like the community’s school or the much-fabled visit of Bessie Spencer to Omatua on the Mangaone River, where she formed the first of the New Zealand Federation of Women’s Institutes. A subcommittee of the Rissington Community Group was created for the tree. Ideas were bandied about by locals. What about a carving? Rissington Community Board member Bronwyn Farquharson said the tree — which was thought to have been planted by a traveller who lived near the Kawekas as amark of where he stayed the night on the way into or out of town — was felled by council contracted arborists on December 20, 2021. Now the exciting work begins. The stump that is left has been deemed safe to carve. And the cost to do the intricate carving into it has been quoted at around $30,000. Over the past two years, the subcommittee has raised $24,000 for the project from mainly Rissington locals, with a sizeable contribution also provided by the Taradale Returned Services Association. With just a small number of donations, the carving can become a reality, Farquharson says. And she’s confident that with a bit of publicity, and a push into Puketitiri and Patoka, it can be raised. “We’re just short of our goal.” The sculpture will depict two soldiers back to back, heads and guns lowered. On return from world wars, many New Zealand soldiers were balloted land for farming. It’s why Soldiers Settlement Rd has its name, and in the surrounding Rissington district, there are farms still occupied by the next generations of those soldiers. “Hopefully people will drive out to see it, but I think it will just add to our valley and the amount of history we have out here.” Farquharson said all things going to plan, the carving work could begin as early as January 17. It could even be ready in time for Anzac Day. It would be quite the occasion, Farquharson says.