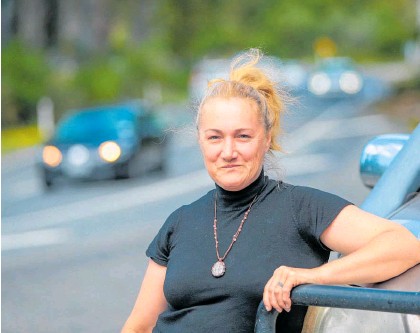 Locals on the Napier-Taupo¯ Rd are plotting a challenge to prevent national highways agency Waka Kotahi NZ Transport Agency from changing the speed limits on State Highway 5. Waka Kotahi announced last month that the speed-limit on about 90km of the highway would be lowered from 100km/h to 80km/h from February 18. MPs have accepted the measure as a stop-gap, pending a spend of at least $100 million they hope will be put into the highway after a business-case study. But Kiri Goodspeed, who lives at Te Haroto, almost midway on the slowed zone from Esk Valley to Rangitaiki, believes NZTA had made up its mind on the change before starting public consultation on its proposal last year and that it ignored the bulk of the 1800 submissions. She’s considering a judicial review — “which costs a lot of money”, but most of all wants better maintenance and an upgrade of sections of highway, and a “pathway” to the restoration of the 100km/h limit. An online petition is about to start, and now she’s invited MPs and NZTA representatives to a public meeting, on a date depending on when they are available. If they’re not, and she’s concerned NZTA did not front at an earlier public meeting, then “we’ll go to Wellington”, she said. Like truck driver, qualified crash analyst, “road safety advocate” and SH5 Napier-Taupo Issues Facebook page administrator Tony “Axle” Alexander, she believes lowering the speed limit won’t necessarily improve safety, and that it could make things worse. The pair said lowering the speed limit to 10km/h below that which applied to trucks would increase dangers as motorists got frustrated behind slower heavier vehicles. As well, the truckies faced longer journeys, with this impacting on their hours of work and the very fatigue and other risks their compulsory log-book keeping was designed to alleviate. Goodspeed says it would have been safer, with less economic impact, to lower the speed limit just to the trucks’ limit of 90km/h, as suggested by some submitters. It’s an approach taken in at least one other area in the NZTA’s Road to Zero vision — an ideal of eliminating the nationwide road and what the NZTA says is “driven by the need to improve safety and reduce harm for everyone on our roads”. Goodspeed highlighted that since increased policing of the highway with the start of the “Stay Alive on 5” campaign in late 2020, there had been no fatalities on it, compared with nine in the rest of 2019-2020. She wonders where the money has been spent, concerned that increased budgets include increased costs of layered levels of contracting and not the actual spend on the work on the road. Alexander, in a column published in the Hawke’s Bay Today, writes: “The zero fatality milestone can be putdown directly to effective road policing utilising the Stay Alive on 5 campaign by Steve Knox, from the Hawke’s Bay district road policing unit.” And Waka Kotahi NZTA had placed slow-down electronic signs on certain parts of the road that were regularly having crashes, and educational signage along the (whole) 123km route, he said. Waka Kotahi director of regional relationships Linda Stewart said last month the submissions hadn’t identified any issues that the agency had not previously considered. Stewart said Waka Kotahi had “clear evidence” to show that the current speed limit was not safe for the road “even for the best drivers”. She said the agency did consider whether different sections should have different speed limits, but said there was no part of the 82km stretch where 100km/h was safe and appropriate. “We know we are doing the right thing for the community. We have listened to the community and understand the need and desire to also make infrastructure changes that will complement the speed limit change.”