Hawke’s Bay free diving royalty William Trubridge reckons his newborn son will be “immune to drowning”. Back in the Bay, the world champion is welcoming the water birth of 6-day-old son Kai, born at home in Havelock North in what he and Japanese partner and actress Sachiko Fukumoto say was a “dream birth”. The newborn, a brother to older sister Mila, is settling well. “He just feeds, poops, and sleeps, and then repeats. The toddler [Mila] is a handful though. But we are getting through it.” A successful freediver herself, Sachiko was filmed while delivering Mila in the short documentary Water Baby, which garnered more than 8 million views globally. Kai’s birth was also filmed for their first featurelength documentary Pacific Mother, set to be released next year. Pacific Mother tells stories of birthing experiences of women around the Pacific, about birthing traditions and ancient birthing wisdom, and what it takes to have a positive birth experience. “It looks at freedom of choice in the whole birthing practice,” Trubridge said. In Pacific Mother, Sachiko travels from Japan to Hawaii, Tahiti, the Cook Islands and New Zealand to connect with ocean women whose interwoven stories about birth and parenthood inspire a more traditional, connected way of life. “The biggest highlight of filming Pacific Mother was feeling the baby’s head as it was crowning, still inside the caul [amniotic sac]. “It’s supposed to be portentous for a baby to be born in the caul, and happens more often in water births. They say it means the baby will be ‘immune to drowning’.” The world’s “deepest” man, son of David and Linda Trubridge, has held many records, including free diving unaided on a single breath to a depth of 102 metres (334 feet). He got back to Havelock North in the second week of August, following a two-week stay in MIQ in Rotorua. “This is the first time I have been here at this time of the year. I am really enjoying it, seeing the blossoms is really nice.” The wha¯nau of four intend to stay in Hawke’s Bay until January. “I am taking a month or two of paternity leave, I won’t go back to dive training till next year. I have a plan for an endurance record attempt in the first or second quarter of next year.” ● The film is being independently funded through the help of the “Pacific Mother Kickstarter campaign” which runs until October 12. Donations through 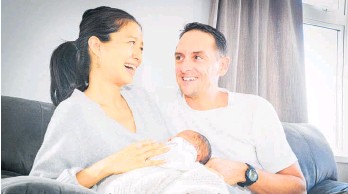