Beryl and Terry Cullen have not had too many dull moments over the past six decades, packing an awful lot into their 60-year marriage. The Napier couple celebrated their special day with daughter Raewyn recently with lunch out at Mission Estate Winery. Beryl, 83, and Terry, 81, funnily enough didn’t actually meet at work, where Beryl was employed as a shorthand typist for the police and Terry as a police constable. They ended up meeting at a party at Beryl’s flat in Wellington. “We didn’t have any music so Terry ran back to the barracks and brought back his portable gramophone,” Beryl says. Their September 30, 1961 wedding took place in Inglewood, where Beryl had been raised on a dairy farm. Terry says the wedding had to work in around milking times. “It was a small farming district and everyone helped. All the locals came to the wedding.” The newlyweds borrowed an Austin-35 and took off for their honeymoon on a tiki tour of Hamilton, Tauranga, East Cape and Gisborne. “It was different times back then, there was very little money.” Terry remained with the police for 19 years, mainly as a detective sergeant. After transferring to Taupo for six years, a change of tack took the Cullens to the Napier-Taupo Rd, where they bought and ran the Te Haroto Roadhouse for nine years. “We ran the tearooms and we also sold petrol. It was a very busy place. It was just along from the Summit Kiosk — it worked well.” Although the roadhouse was a seven days aweek operation, Terry was able to fulfil his love of running. “I had the ability to get out and go up into the forest.” The Cullen family had expanded to include a bunch of children — eventually totalling seven — who grew up in the outdoors. “We had all sorts of pets — different birds and animals — it was like a zoo. The kids made a flying fox and put their baby brother on it. We didn’t know what they were up to at times, we were so busy. So many things happened — accidents and incidents. When you look back, it was a good experience. The stories come out now,” Terry says. As if that busy lifestyle wasn’t enough, Terry and Beryl sold up in 1984 and bought the Westshore Cornerstore, another seven day a week business. “It was another very busy place. We also had books and collectables. I used to do baking for the shop — slices and muffins. That money helped pay for our trip,” Beryl says. The couple had many excursions overseas after life had become a little less busy, their first being a very memorable trip to the Rugby Sevens in Hong Kong in 1991, followed over the years with trips to Australia, England and South America. Keeping busy didn’t stop with work and travel. Beryl has been involved with the Women’s Institute and a spinning group, with Terry taking up gardening for a living until recently and the pair keeping fit at Kiwi Seniors. They also loved musical theatre and were involved in the local Young Stars at Heart group, putting on an annual show for rest homes until bowing out a couple of years ago. “We have a piano and still have a good sing-a-long when the kids get together — all the old songs. The family come and take over,” Terry says. The couple’s children are scattered throughout the North Island and one in Australia. They now have 11 grandchildren and seven greatgrandchildren ranging in age from 4 to one in their 30s. “We’re very lucky in our family. All the kids’ marriages have stayed together. They all get along.” Terry believes not getting too upset about “silly, little things” is the ticket to a happy marriage. “And be tolerant. Also if you can have a laugh and through that laughter you can forget about things that annoy you.” Beryl says Terry has a good sense of humour, is kind, loyal “and annoying at times”. Terry says he wouldn’t change a thing about her. “There is nothing to dislike.” Although the couple were hoping to have friends and family from Auckland join them on their anniversary, they were happy with lunch out and will celebrate again at a later date. And what was for dinner on their special night? Baked beans. 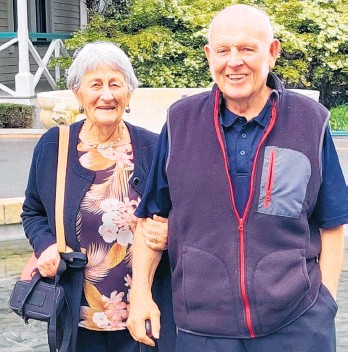