Tararua’s road network is one of the largest in the country and the council, through its alliance with Downer, has been carrying out some impressive maintenance and renewal work in the past year. This work is subsidised through the National Land Transport Fund managed by Waka Kotahi NZ Transport Agency. Just how impressive was made clear by some intriguing comparisons made by Downer staff member Hamish Featonby in the annual report. He reported that in the 2020/21 year the council has: Completed 49,825km of road inspections and patrols, the equivalent of one trip around the world; Filled 6838 potholes, averaging 30 per day; Graded 1886km of unsealed roads, the equivalent of the length of NZ; Treated 58,435 sq m of footpaths for lichen, an area larger than the bush around Pukaha; Repaired 47,100 sq m of defective pavement, equal to 6.7 rugby fields; Renewed 245.6km of surface channel, the equivalent of from Tararua to Mt Taranaki; Applied 12,755 cu m of metal to unsealed roads, enough to fill five Olympic-sized pools; Resurfaced 352,401 sq m of sealed roads, similar to the area of two Auckland Airport runways; Repaired 219.2km of road shoulders, which is the equivalent of from Dannevirke to Wellington Airport. Whether this work can continue when the 2021-24 Land Transport Programme is announced remains to be seen, with the National Land Transport Fund under increasing pressures and indications from Waka Kotahi that funding for local road operations, maintenance, renewal and improvements is going to be reduced. 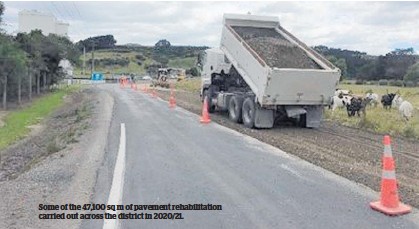 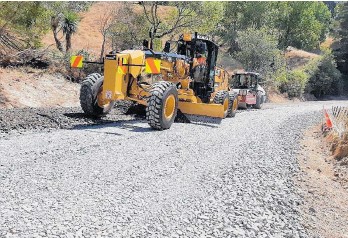