In brilliant, warm sunshine on a beautifully manicured green the Dannevirke Bowling Club held its open day on Saturday, September 25. A good turnout of over 30 players came out to participate, Mayor Tracey Collis beginning proceedings bowling the first bowl (pretty accurately too). Prior to starting out on the green Mayor Collis presented club stalwarts Eddy Warrington and Grant Mainwaring with long overdue certificates and pins resulting from their great win in the Manawatu Championships Men’s Pairs earlier in the year. Eddy and Grant had been waiting to receive their plaques, held up by lockdown, and it was appropriate Mayor Collis was on hand to reflect the prestigious achievement. Eddy Warrington said winning the pairs has been elusive having got to the finals several times but this was his first win. He said it just goes to show “if you really put your mind to it you can achieve anything.” It is the first time the club has won it since “the eighties” according to Grant Mainwaring. It follows on from the pairing of Joy Herbert and Bev Ellmers winning the Manawatu Women’s Pairs last year. 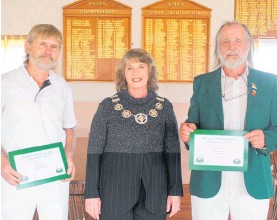 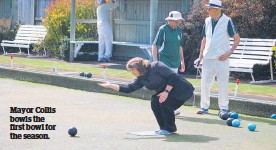