Cancellation of Tararua Squash Club’s 50th jubilee celebration in November was decided on Wednesday due to Covid restrictions — sad considering all the work the organising committee had put into preparing for the milestone. Gordon Herbert remembers joining the Tararua Squash Club back in 1973, two years after the club started, when it had a closed membership of 300. “Arthur Waugh and I joined at the same time, applying in January and waiting until someone retired, eventually being admitted at the end of March,” said Gordon. “It was like that until 1976, when the Pahiatua Golf Club opened up at Mangatainoka circa 1976. “A lot of members left and went over to the golf club. But squash later went through a popularity stage with players like world squash champion Susan Devoy, Stuart Davenport (world No 3 ranking in 1987) and Ross Norman MNZM, a former professional squash player from New Zealand. He is best remembered for winning the World Open in 1986, when he beat Jahangir Khan of Pakistan in the final 9-5, 9-7, 7-9, 9-1 “The thing that has given Tararua Squash Club longevity is that it has always been a very friendly club. Squash is a game that can be quite cliquey due to grading, but our club has never been like that. “The fact that the club’s building is freehold has contributed to the longevity as well. This was due to Don Selby and Peter Reid financing the building by issuing 15-year debentures which were required to be repaid by 1986 with a repayment scheme set up. It absolutely set up the club. “The club still had to do fundraising, I can remember a group of 30 of us spending several weekends planting poplar trees, organised by Geoff Davidson. There were weekends spent stacking posts at the MSD-Spiers yard. David Johnson, manager at Totaranui, was good at organising work which included crutching sheep. “Not being in debt allowed the committee to do things for the club such as painting, whereas most other clubs suffer from lack of money. This has meant subscriptions are set at a reasonable level. “Tararua Squash Club has always been a good club for juniors, with a strong junior section, with very good junior coaches. The club has never had any trouble getting junior coaches. “People say juniors are the strength of the club and in a way, that’s true. “They start at primary school, go through college, then they play some other sport. But when they eventually come back to squash, they come back really strong because they’ve been taught how to do it properly. “Most people just start playing, join up, get into the social side, but they bring these bad habits from others sports such as tennis or badminton and they are too shy to ask for coaching . . . When you’re a junior, you’re taught how to play the game and how to strike the ball. We’ve produced a New Zealand Junior Champion in Luke Jones (U19), and Brodie Bennett — U13 Junior Champion. John Pinel was the first A-Grader in the club followed by Lyndsay Bengeman and Luke Jones (within the club.) “My wife Shirley and I were made life members around 1986/87. I was on the committee from 1975 for 14 years and became patron in 2002. I still have an interest in the club and attend tournaments and follow my daughter Andrea who plays and my grandson Luke Jones. 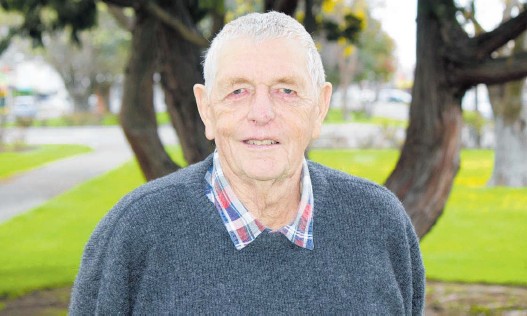